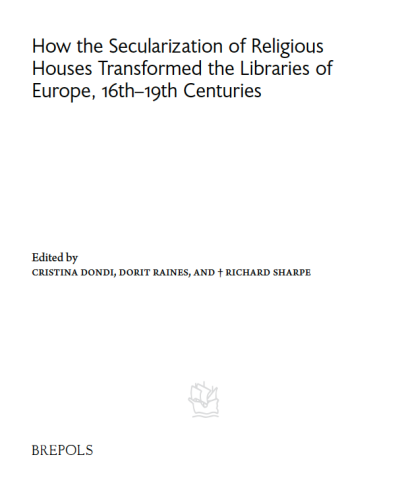 During the process of secularization or nationalization of religious property, part of Latin American monastic and religious school libraries were turned over to the state. In this paper, we address three key periods: a) the expulsion of the Jesuits in 1767, b) independence from the Spanish Crown, which promoted the first secularization movement in Bolivia and Peru, and c) the secularization laws of the second half of the nineteenth century, which had a major impact on monastic collections in Mexico. In addition, we look at how these books became part of libraries and private collections, with a particular focus on some establishments that hold considerable numbers of books from the monasteries. Finally, we analyse some catalogues and research on the provenance of books that help us to reconstruct the monastic collections. These studies on ownership marks enable us to identify copies from the monasteries that are now preserved in South American public, university and national libraries.

The process of nationalizing religious property was extremely complicated and evolved in very different ways in different countries. Here we provide a general overview that focuses on the main characteristics of the change that these books underwent when they left the Church and were transferred to a new owner.